The flag of Afghanistan will be used as a symbol of “solidarity and peace” as the Tokyo 2020 Paralympic Games kicks off on Tuesday night in Japan.

The 16th Summer Paralympics — delayed by a year due to the pandemic — will take place amid Japan’s worst outbreak of Covid-19, with spectators banned from the majority of events and Tokyo and surrounding prefectures under a state of emergency due to surging case numbers.
Speaking on the eve of Tuesday’s opening ceremony at the Olympic Stadium in Tokyo, President of the International Paralympic Committee (IPC) Andrew Parsons said he was determined the Paralympics would be held safely.
“One of the questions I am asked very often is, ‘can we have safe Games?’ and the answer is yes, we would not be here if we did not believe we could deliver safe Games,” he said.
Parsons confirmed Afghanistan’s flag will be incorporated into the opening ceremony parade despite Afghan athletes pulling out of the Games due to flights being canceled from the country.
Kabul’s airport has been the focus of the world’s attention this week after the Taliban seized the capital, with thousands of people trying to flee the new regime.
“We will include the Afghanistan flag in the ceremony in a sign of solidarity and we have invited the United Nations High Commissioner for Refugees representative here to act as the flagbearer,” Parsons told reporters.
“It is important to highlight that as it is a message of solidarity and peace that we send to the world,” he added.
“We would like to have them here, unfortunately it is not possible, but they will be here in spirit.”
The Taliban’s takeover in Afghanistan is seen as a threat to the nation’s sporting ambitions, with sportswomen afraid they’ll be punished for trying to compete.
In a statement to CNN Sport last week, the IPC said it was “supportive of the practice of sport as a basic human right.”
“Every individual should have the possibility to play sport and no-one should be discriminated against because of their disability, gender, sexual preference, race or religion,” it added.
READ: After 72 operations, Paralympian says ‘body and mind is stronger than you can imagine’ 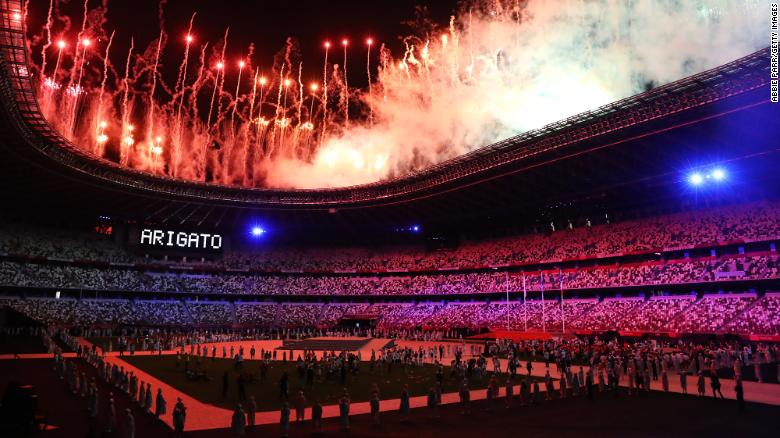 Fireworks are lit to end the Tokyo 2020 Olympic Games on August 8.

Earlier this month, Japan waved goodbye to thousands of athletes following an Olympics widely viewed as a success despite a litany of scandals and the backdrop of surging coronavirus cases in the country.
The hosts are now primed to welcome thousands more athletes as the Paralympic Games get underway, scheduled to run through September 5.
There was an absence of spectators for 97% of competitions during the Olympics — including in all Tokyo venues, with limited capacity in several other prefectures — and last week, organizers said the Paralympics would also be held behind closed doors amid the pandemic.
Japan has reported nearly 435,000 Covid-19 cases and 577 deaths in the past 28 days, according to data from Johns Hopkins University. Tokyo, the epicenter of the country’s outbreak, confirmed 2,447 new cases on Monday, down 515 from the same day last week. It was the first time in two days for the capital’s daily tally to fall below the corresponding day in the previous week.
Tokyo 2020 Paralympic Games
On August 17, the Japanese government extended the state of emergency in Tokyo and other regions to September 12 as cases soared.
“The Delta variant raging across the world is causing unprecedented cases in our country,” Prime Minister Yoshihide Suga said.
“Serious cases are increasing rapidly and severely burdening the medical system, particularly in the capital region.”
It means athletes will have to compete without family and friends in the stadium, something which some competitors at the Olympic Games said they struggled with.
Nonetheless, Paralympic triathlete Melissa Stockwell, one of Team USA’s flag bearers, said she’s looking forward to making the most of it.
“It was pretty tough to hear the news that family and friends were not going to be allowed at the Games,” Stockwell told CNN.
“I had these images of running down the finish line with my husband and my kids on the sideline yelling, ‘Go, mommy, go!’ and that’s not going to happen and that’s very unfortunate.
“I think as far as my family goes, they’re not here physically but they’re here in my mind, and I’ll still hear those ‘Go, mommy, go’ screams in my mind as I run down that finish.”
READ: Afghanistan’s first female Olympian says women will not give up their liberties easily 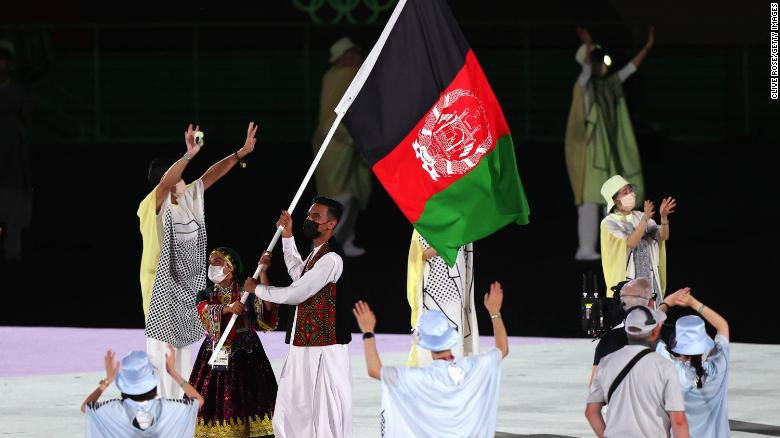 Flag bearers of Team Afghanistan during the Opening Ceremony of the Tokyo 2020 Olympic Games.

Despite the very real threat posed by the pandemic, organizers insist they can still host a safe and successful Paralympic Games, pointing to the relative success of the Olympics.
The same strict precautions will be in effect with athletes confined to small social bubbles and required to undertake extensive testing.
But fans can still get excited to watch athletes compete in 22 different sports, with badminton and taekwondo making their Paralympic debuts.
Bhutan, Grenada, Maldives, Paraguay, and St Vincent and the Grenadines will also be taking part at a Paralympic Games for the first time, with 162 delegations set to compete.
There are three more nations competing in Tokyo than there were at Rio 2016 but London 2012 still holds the Paralympic record, with 164 delegations taking part.
“It is always special to see an NPC (National Paralympic Committees) make their first appearance at the Paralympic Games,” Parsons said.
“With all the challenges created by the pandemic, seeing these NPCs as part of the opening ceremony on August 24 will be an extra special and emotional moment for all concerned.”
Oz Sanchez’s Paralympic success is a ‘testament to the person I’ve become’ 03:36

Among those federations competing will be the Refugee Paralympic Team, which consists of six athletes — one woman and five men.
The IPC says the group “represents the more than 82 million people around the world who have been forced to flee war, persecution and human rights abuses — 12 million of whom live with a disability.”
Bayern Munich’s football star Alphonso Davies penned an open letter to the Refugee Team ahead of competition, saying those involved were an inspiration.
“Not everyone understands the journey you have been on,” wrote Davies, who himself was a refugee before his family moved to Canada. “But I do, and that’s an important part of what made me who I am.
“I’ve read your stories and learnt about the journeys you have all been through. You are the most courageous sports team in the world right now.
“One of the things I know about sport is its power to change lives. You are all role models now with the power to inspire others. Make no mistake, what you are about to do in Tokyo will change people’s lives.
“There are going to be young people who will take up sport because of you.”

Afghanistan: Secret Kabul talks between CIA and Taliban - US media