People who are tired of the war for power are disgusted by the prolongation of the war and violence. They criticize the government for not dealing with perpetrators and the founders of violence and catastrophes with a strong stance. Half of the people are willing to leave the country and the other half without having the right to choose are forced to endure these conditions. The consequences of violence in the country lead to nothing but bloodshed, destruction of country’s infrastructure and backwardness of the educational systems. The groups involved in the war and violence still insist on their irrational demands.

It has been nearly two years since the US peace agreement with the Taliban but except the increase, there has been no reduction in violence. The government’s serious will as the protector of the people has also not been seen.

In the past two weeks, there have been reports of women arming themselves against the Taliban in different parts of the country; this is due to the inevitability and fatigue. These women believe that living in a situation where they taste death every time, or feel the shadow of death over their heads and their loved ones has no difference with the death itself. So they decided to arm themselves against their enemies and defend their lives and the lives of their loved ones.

If we call women the real victims of wars and violence, it is not unreasonable because after every war a man is killed, wounded or disabled as a soldier. The burden and responsibility of that man simply falls onto women’s shoulders. Apart from that, women have other responsibilities at home as well. There are other intangible aspects in the traditional society that increase the psychological pressures on woman as well.  They are harassed for being a widow or having an orphan. This has been experienced by a large number of women.

The Taliban’s show of force and coercion has forced women to join forces with men to gain access to their right to life and security against the Taliban. The Taliban think at the moment that they have a lot of power and can rule people by force, giving people no choice but they are unaware of the fact that society is not the society of 20 years ago and people cannot and do not want to return to a period from which they have nothing but bitter and horror memories.

Supporting the Country's Soldiers is the Duty of Afghan Citizens 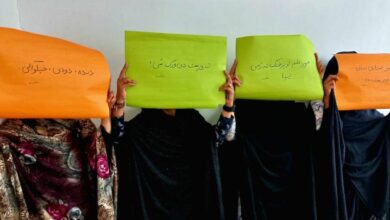 Women’s protest against the Taliban in Helmand and Samangan provinces